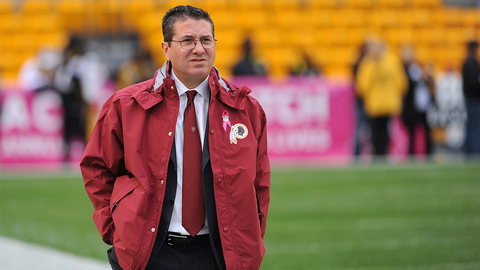 There will be a name change Monday for Washington's National Football League team, per a SportsBusinessJournal report. In an interview July 4, Coach Ron Rivera - who is working with owner Daniel Snyder to choose a name - said he hoped the new name would be in place by the start of the 2020 season.

The franchise did not disclose the new name, stating that it is still in development. Rivera had said the team wanted to include the military in its new name. FedEx on Thursday called for the team to change its name, and Nike appeared to remove all Redskins gear from its online store.

Now, it seems Fawn will get her way. with SBD reporting the team will finally move on from the "Redskins" and switch to a new team name.

The Washington NFL team plans to announce Monday morning that they will change their team nickname, three people with knowledge of the situation confirmed Sunday night.

Nike recently dropped all Redskins merchandise from their website following encouragement from activists, an action also mirrored by Amazon.

Why it matters: It brings an end to decades of debate around the name - considered by many to be racist toward Native Americans.

The global reckoning on race and equality issues since the death of George Floyd had renewed focus on the name and dark-skinned logo used by the team. The Cleveland Indians baseball team is also conducting a review about whether to change its name - the team removed their former mascot, "Chief Wahoo", two years ago amid criticism.

District of Columbia mayor Muriel Bowser has said the name was an "obstacle" to Snyder building on the old RFK Stadium site, which is believed to be his preference. The current logo shows the profile of a red-faced Native American with feathers in his hair. Multiple sources said the name would be changing, but there was nothing official from the team. They also want it to last for the next 100 years, which means we can assume it won't be almost as offensive as the freshly retired name.