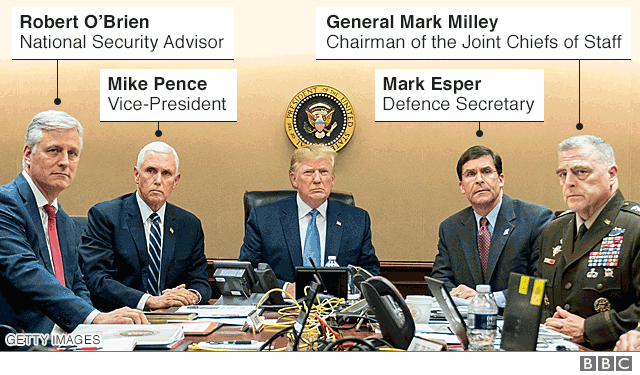 29, confirmed the death of another ISIS leader who is the No.1 successor of Abu Bakr al-Baghdadi.

More details of the mission also emerged on Monday. Trump said the troop pullout "had nothing to do with this".

While speaking to reporters on Sunday about the successful USA military raid on Islamic State leader Abu Bakr al-Baghdadi - which resulted in his death - President Donald Trump revealed that a K-9 unit had been part of the operation, and that one of the fearless dogs had been injured.

The Pentagon is expected to release video of the raid that killed al-Baghdadi.

On Monday, President Donald Trump tweeted a photo of the canine and wrote that it had done "a great job in capturing and killing the leader of ISIS".

"One of our sources was able to reach the house where Al Baghdadi was hiding". Trump was likely referring to Islamic State spokesman Abu Hassan al-Muhajir, named as a potential replacement for the notorious terrorist leader.

Kremlin spokesman Dmitry Peskov declined to say on Monday if the USA had informed Russian Federation about the operation in advance or provide other details.

On Saturday, the U.S. Army's most elite fighting force, DELTA team, targeted al-Baghdadi in northeast Syria. "Or hurt. We had nobody even hurt", Trump said.

The killing of the top leadership will be devastating to ISIS, said Defense Secretary Mark Esper.

The CNN host continued on to explain why "a win is never good enough" for Trump, noting that the president said "another president should have gotten him".

Abu Bakr al-Baghdadi was the Iraqi-born leader of the Islamic State of Iraq and the Levant (ISIL). "He was an inspirational leader in many ways", Esper told CNN in another interview Sunday.

President Trump announced on Sunday that al-Baghdadi had "died like a dog" and "like a coward" as the former ISIS leader detonated a bomb-vest while USA troops closed in.